Designing costumes and writing fantasy have been my dreams for years, and now I get to do both.

I grew up in Northern California, and have lived in England and Colorado, and I now live in central Texas.  I have been a writer, a receptionist, a waitress, a computer programmer, a warranty clerk, a real estate assistant, a costume maker, a technical writer and a dressmaker. Above all, I am an avid reader.

I'm also a costume historian and the creator of the Mantua-Maker historical sewing patterns. My costumes have won Best in Show at Costume Con, organized by the International Costuming Guild.


My books are available at www.mantua-maker.com and on Amazon

I've published my fantasy novels under my initials, D.J. Salisbury, to avoid confusion with my nonfiction work.

Sorcery's Child
The day his best friend is murdered, Viper is a thirteen-year-old apprentice whose only goals are to graduate to sorcery’s third level and to save enough money to buy a new book. But now he’s running from a killer, battling monsters large and small, and trying to keep up with his prickly companion.

Serpent's Child
When a magical creature talks Viper into creating weapons to prevent the rise of a dreaded Mindbender, Lorel agrees to help. Even if it does mean traveling with a monster-sized snake.
But just reaching the distant land where they can collect the elements for those weapons is a nearly impossible quest.

Putting up with each other for two thousand miles might be the hardest task of all. 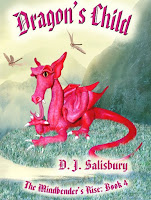 Dragon's Child
Getting snatched by a dragon may not be a death sentence, but it certainly feels like one.

While Viper struggles to learn enough magic to escape the dragon’s lair before the creature decides to eat him, Lorel, Tsai’dona, and Kyri battle through the mountains to locate and rescue him.

But the dragon has plans of her own. 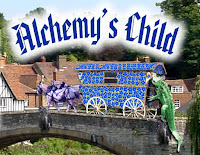 Alchemy's Child
Viper and his crew must find the wielders of his magical weapons and convince them to join the battle against the newest Mindbender.

Plus they need to find a wizard to unleash the power inside the weapons.

But who in their right mind wants to go to war with an overgrown snake and a trio of crazy teenagers? 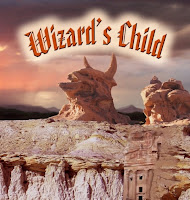 Wizard's Child
After rejecting all other options, Viper undertakes the Wizard’s Route, the grueling physical and magical journey all would-be wizards must endure. And he’s none too sure he’s going to make it.

Lorel must survive – waiting. Is it possible for a girl to die of boredom? She has no idea how much trouble a bored warrior can stumble into.

Magic's Child
The world’s newest wizard, dubbed Whitewing but known to friends as Viper, accepts the mission to track down and destroy a Mindbender before it takes over the world. But if his own half-trained magic doesn’t destroy him, battling wizards unhinged by the enemy will.

Just one thing worries him: How can a wizard named after a butterfly defeat anybody?
The final novel in "The Mindbender's Rise" saga!


And a stand-alone novel set in the same world:

Necromancer's Anchor
Sixteen-year-old Denton is shocked when he’s blamed for a child’s death, and horrified by the blackmail that follows: If he doesn’t steal an ancient relic from the temple, his family will be executed by priests sworn to protect the holy anchor.

He’s never stolen anything, ever. Now what does he do?

Before he can decide, he’s saddled with Rosette and Emery, cousins he must entertain, but doesn’t dare confide in. Surely they can’t stumble into trouble when he takes them to see a ruined castle while he figures out how do deal with the threat.
Formerly titled: Feda's Anchor 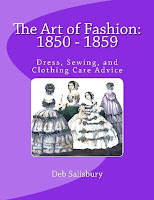 The Art of Fashion: 1850 - 1859
Dress, Sewing, and Clothes Care Advice
with over 490 B/W period illustrations.
During the 1850s, the art of fashion was studied by every woman who wanted to create her own wardrobe. Ladies magazines were scrutinized and dissected, scoured for details on how each effect was created, how many seams were used, and how the pleats were formed. She learned why changes were made, when they went out of date, and how to recreate the styles she liked. Most of all, she studied what the current rules were, even though they seemed to change monthly, especially for the most fashion conscious women.
324 pages in an 8.5” x 11” format. 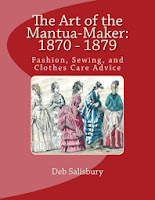 The Art of the Mantua-Maker: 1870 - 1879
Fashion, Sewing, and Clothes Care Advice
with over 740 B/W period illustrations.
This book compiles sewing and fashion advice given in those books and magazines during the 1870s, given in the words of writers of that time. Each entry shows the name and date of the periodical quoted. I’ve included as many pattern sketches as I could find.
307 pages in an 8.5" x 11" format. 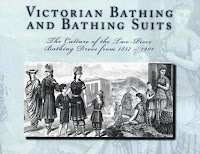 Victorian Bathing and
Bathing Suits
The Culture of the Two-Piece
Bathing Dress from 1837 – 1901
Descriptions of Bathing Suits and Bathing Culture,
with over 125 B/W period illustrations.
123 pages (including the bibliography), in an 8" x 11.5" format.

My dictionary of Regency fabrics,

Fabric à la Romantic Regency
A Glossary of Fabrics from Original Sources
from 1795 – 1836
Covering Fabric, Feathers, Furs, Ribbons and Laces, Including their Uses, Contemporary Opinions, and the Occasional Definition.
357 pages long (including the bibliography) in an 8" x 11.5" format.
Except for the cover page, there are no illustrations. 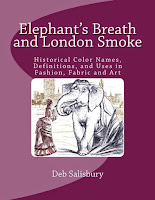 My dictionary of color in history,
Elephant's Breath and London Smoke,2nd Edition
Historical Color Names, Definitions, and Uses
in Fashion, Fabric and Art 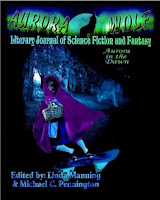 I am thrilled that my story,
Amber Profits

was selected to be published in
Aurora in the Dawn,
Aurora Wolf's first anthology.