The mantua was a fashionable style of gown in the late 1600's. While the mantua was popular, women gained the legal right to make this loose, flowing gown. Before this time, women could make underwear, but only male tailors were allowed to make upper class clothing and corsets - by law! Women won the right to make unboned gowns during this period, and these women were know as Mantua-makers. 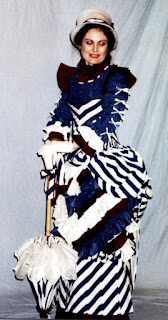 These women quickly branched out to hats and accessories, then to other types of clothing. Since the unboned mantua was popular for only a couple of decades, expanding was necessary for the female dressmakers' survival, no matter how much the tailors complained.
The term mantua-maker was used for a fashionable dress designer/creator long after the mantua was forgotten, even as late as the 1890's. It was replaced by the more modern term of modiste.
In my current novel, Monsoon Rain, Rosette aspires to become a Mantua-Maker. She has studied fashion trends, present and past.
Monsoon Rain is now up to 31,175 words. I'm writing a bit slower than I'd planned, but I'm pleased with the quality.
Posted by Deb Salisbury, Magic Seeker and Mantua-Maker at 11:10 PM